Podgorica, 16 November – A professor in Comparative Politics from Nottingham University, Fernando Casal Bértoa, held a lecture titled “The crisis of representative democracy and rise of anti-establishment parties” at the Faculty of Political Science in Podgorica.

Casal Bértoa talked about rise of populist movements around Europe using the examples of France, Austria and Germany and other countries. He said that 2016 and 2017 had been bad in that respect and that democracies had been seriously challenged.

He then explained the situation with traditional political parties through a number of trends and data. Trust in parties has been declining for years now. According to Transparency International, political parties are considered to be the most corrupt institutions in 51 countries.

“People are more likely to believe that there is life on Mars than trust political parties. This is problematic,” said Bértoa.

When they vote, people are more likely to change their party. There are also more and more parties forming, which makes the formation of a government more difficult. It now takes a year or more to form a coalition government.

But that is not the worst news, explains Casal Bértoa: most of the new parties for which people are voting are populist, extremist and anti-system parties that want to get rid of democracy or the liberal system. To date, there has been an increase in every single European region in voting for these parties, especially since 2008.

Most scholars think that support for these parties is a challenge to democracy and research shows that the higher the level of success of antiestablishment parties, the lower the level of democracy.

Casal Bértoa listed several of the most popular causes that academics offer as explanations, such as the economy, the factor of alignment, societal changes and the economic crisis.

He is proposing “a change in diet” for the parties to resolve the current crisis. Casal Bértoa believes that traditional parties need to transform, become more institutionalised, more transparent. Parties have to show the voters that they are reliable, to regain the trust of the public, to learn how to compromise. “We need parties that have long-term plans, that are not thinking only about the next elections,” claims Casal Bértoa.

“Populism can be beneficial to democracy because it can give opportunity for traditional parties to react and reinvent themselves, before it’s too late,” said Casal Bértoa.

The event was part of a series of lectures organised by the EU Info Centre in which professors from EU universities are giving talks at Montenegrin universities. 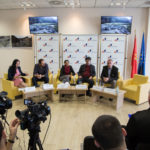 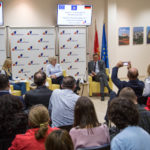