As President Juncker announced in his 2017 State of the Union address, the Commission adopted today a strategy for ‘A credible enlargement perspective for and enhanced EU engagement with the Western Balkans’, confirming the European future of the region as a geostrategic investment in a stable, strong and united Europe based on common values.

The Strategy spells out the priorities and areas of joint reinforced cooperation, addressing the specific challenges the Western Balkans face, in particular the need for fundamental reforms and good neighbourly relations. A credible enlargement perspective requires sustained efforts and irreversible reforms. Progress along the European path is an objective and merit-based process which depends on the concrete results achieved by each individual country.

Today, the European Commission announced six flagship initiatives with specific actions that the EU will take over the next years to support the transformation efforts of the Western Balkans. The Strategy also underlines the need for the EU to be prepared to welcome new members once they have met the criteria.

President of the European Commission Jean-Claude Juncker stated: “Investing in the stability and prosperity of the Western Balkans means investing in the security and future of our Union. Although there will be no further enlargements under this mandate, today the European Commission is charting the European path ahead for the Western Balkans. Accession negotiations are already well underway with Montenegro and Serbia. With strong political will, real and sustained reforms, and definitive solutions to disputes with neighbours, they could potentially be ready for membership in a 2025 perspective. Whether this is achieved will depend fully on the objective merits and results of each country. I will travel to the Western Balkans at the end of this month with a clear message: keep reforming and we will keep supporting your European future.” 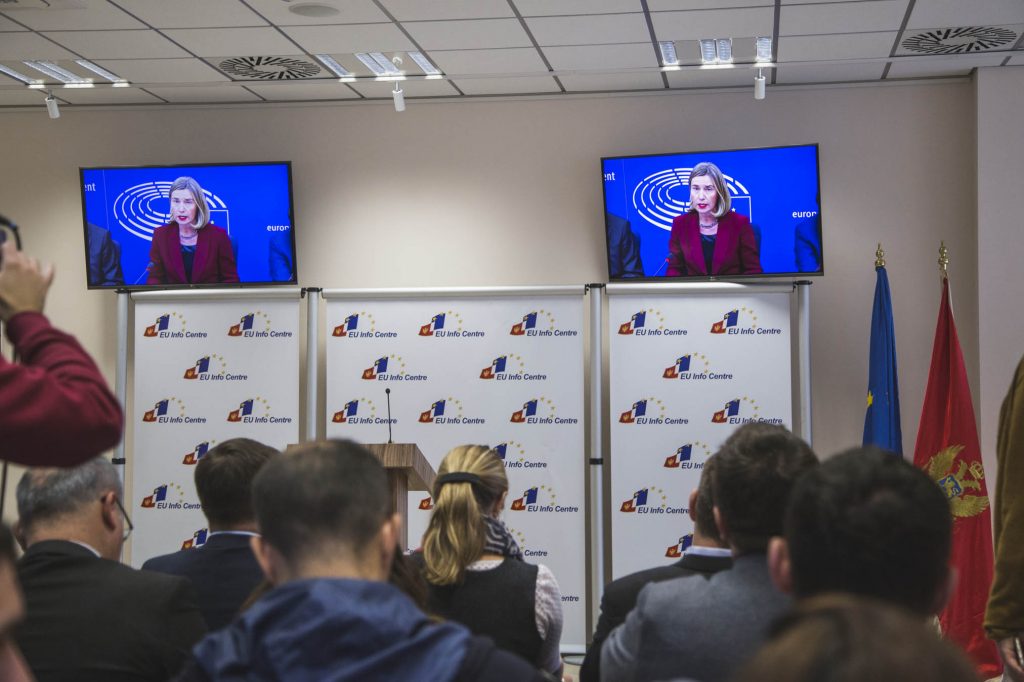 High Representative/Vice-President Federica Mogherini commented: “The Western Balkans lie at the heart of Europe. They are part of our vision of the European Union. This strategy is a strong and clear sign of how determined we are to bringing the region inside our Union. This process is irreversible. The 2025 perspective we propose means that we all now need to roll our sleeves up and get to work, both in the European Union and in the Western Balkans. Next months will be intense and we will work together to make sure that all the opportunities are seized.”

Commissioner for European Neighbourhood Policy and Enlargement Negotiations Johannes Hahn stressed: “ Today we confirm that the door of our Union is open for the Western Balkans which is already an enclave surrounded by the EU, and that our offer is sincere. With the new approach, underpinned by concrete measures, we are strengthening the enlargement process which requires credible efforts and reforms in return in particular to strengthen the rule of law. We have to work for the benefit of the citizens.”

Focus on convincing reforms and reconciliation

In order to meet the EU membership criteria and in their own interest, the Western Balkans need to implement comprehensive reforms in crucial areas. The rule of law, fundamental rights and governance must be strengthened significantly. Judicial reforms, the fight against corruption and organised crime, and public administration reform need to deliver real results and the functioning of democratic institutions need to be seriously enhanced. Economic reforms must be pursued with vigour so that structural weaknesses, low competitiveness and high unemployment rates are addressed. 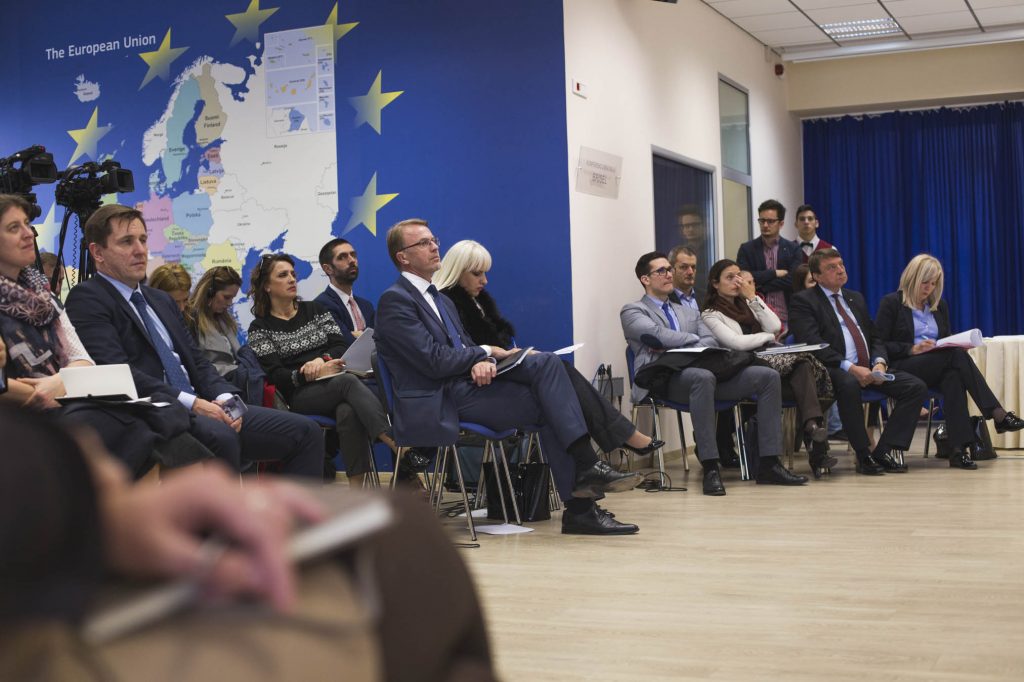 All countries must unequivocally commit, in both word and deed, to overcome the legacy of the past, by achieving reconciliation and solving open issues, in particular border disputes, well before accession to the European Union. There needs to be a comprehensive, legally-binding normalisation agreement between Serbia and Kosovo so that they can advance on their respective European paths.

Six flagship initiatives to support the transformation of the Western Balkans

The EU is already the most important donor and investor in the region as well as political partner of the Western Balkans. The EU is also the Western Balkans’ largest trading partner with an annual total trade volume of €43 billion (2016). Today, the European Commission set out Six flagship initiatives that will further strengthen our cooperation in a number of areas and support the transformation process in the Western Balkans. These flagship initiatives target specific areas of common interest: rule of law, security and migration, socio-economic development, transport and energy connectivity, digital agenda, reconciliation and good neighbourly relations. Concrete actions in these areas are foreseen between 2018 and 2020.

Next steps on the EU path

The EU’s enlargement policy must be part and parcel of the larger strategy to strengthen the Union by 2025 set out by President Juncker in his State of the Union speech of September 2017 and his Roadmap for a More United, Stronger and more Democratic Union. While by that date, the EU could become larger than 27 Members the dynamics of moving forward on their respective EU paths for all Western Balkans is based on their own merits and at their own speed depending on the concrete results achieved. The Strategy explains the steps that need to be taken by Montenegro and Serbia to complete the accession process in a 2025 perspective. While others could catch up, Montenegro and Serbia are the only two countries with which accession talks are already under way. This perspective will ultimately depend on strong political will, the delivery of real and sustained reforms, and definitive solutions to disputes with neighbours. 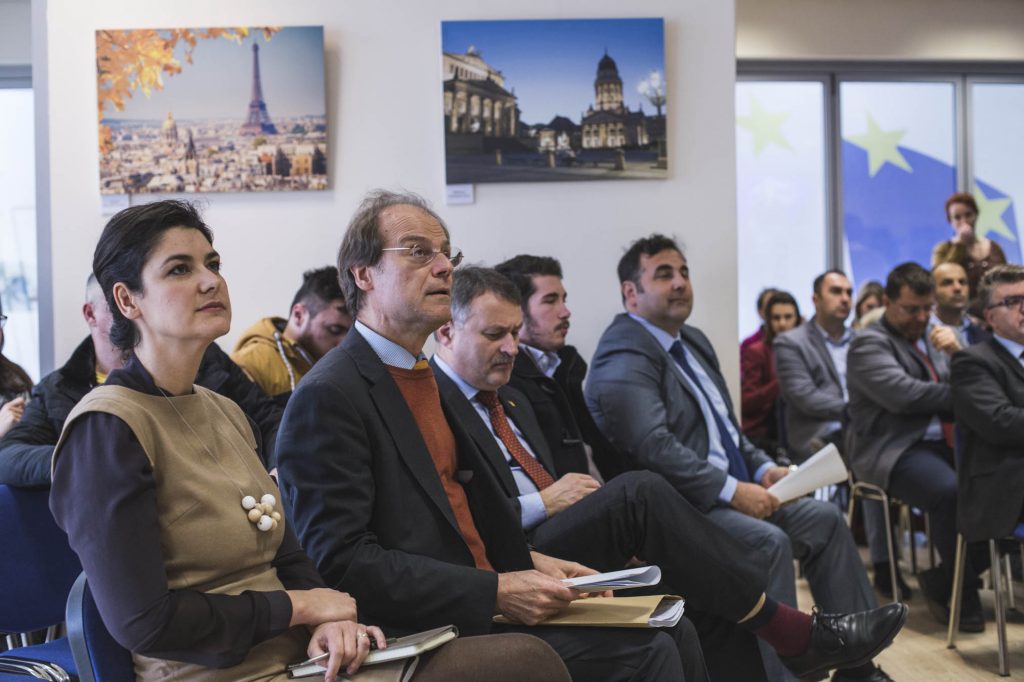 All Western Balkan countries have the chance to move forward on their respective European paths. The Commission assesses all the countries in a fair and objective manner on the basis of their own merits and at the speed at which they achieve progress. Albania and the former Yugoslav Republic of Macedonia are making significant progress on their European path and the Commission is ready to prepare recommendations to open accession negotiations, on the basis of fulfilled conditions. The Commission will start preparing an Opinion on Bosnia and Herzegovina‘s membership application following receipt of comprehensive and complete answers to its Questionnaire. With sustained effort and engagement, Bosnia and Herzegovina could become a candidate for accession. Kosovo has an opportunity for sustainable progress through implementation of the Stabilisation and Association Agreement and to advance on its European path once objective circumstances allow.

Political commitment from the regions’ leaders

Much work lies ahead for the countries concerned to be in a position to meet the conditions and criteria for EU membership. The Strategy highlights that leaders in the region must leave no doubt as to their strategic orientation and commitment. It is them that ultimately must assume responsibility for making this historical opportunity a reality.

The EU itself needs to be ready for new members of the family – once they have met the conditions – including from an institutional and financial perspective. The Union must be stronger, more solid and more efficient before it can be bigger. To ensure effective decision-making, we need to make use of qualified majority voting in the Council in the policy areas where this is already foreseen. In addition, the European Commission will present possibilities to further enhance the use of qualified majority voting in the third quarter of 2018 – as announced by President Juncker in his 2017 State of the Union address.

A more effective system is also needed to tackle systemic threats to or breaches of the rule of law in any EU Member State with a Commission initiative to be expected in October 2018.

Finally, special arrangements must be put in place to ensure that new Member States are not in a position to block the accession of other Western Balkans candidates.

To deliver on the Western Balkans Strategy and support a seamless transition to membership, adequate funding is indispensable. The European Commission proposes to gradually increase funding under the Instrument for Pre-Accession Assistance (IPA) until 2020 in so far as reallocations within the existing envelope allow. In 2018 alone, €1.07 billion of pre-accession assistance for the Western Balkans is already foreseen, on top of almost €9 billion from the 2007-2017 period.