Podgorica, 4 July 2017 – Hungary will chair the Visegrad Group for the fifth time until June next year. Hungary took over the role of president from Poland at a ceremony in the EU Info Centre.

“This is a great opportunity for us, but at the same time a commitment to other member states and other partners. The Hungarian presidency will strive to strengthen the Visegrad Group as a factor of stability in relation to external challenges, such as the migrant crisis and an unstable security environment in our southern and eastern neighbourhoods,” said Krisztian Posa, the Hungarian Ambassador to Montenegro.

The Ambassador of Poland to Montenegro, Irena Tatarzynska, reminded that the Polish presidency of the Visegrad Group had been focused on topics of importance for the European Union. 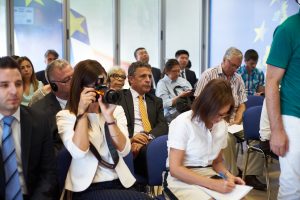 “The Polish V4 presidency continued the crucial V4+Western Balkans dialogue. On 29 November 2016 Poland hosted the annual meeting of foreign affairs ministers of the V4 and the Western Balkans in Warsaw. On the occasion of this meeting the V4 adopted a joint statement where the V4 countries’ heads of diplomacy reiterated their continued interest in support for the Western Balkan countries on their EU path,” said Tatarzynska.

The Visegrad Group has only one common institution – the Visegrad Fund, with its headquarters in Bratislava.

“Through this fund we are financing various projects, including the region of the Western Balkans. The annual budget of the fund is €8 million. The members of the V4 contribute to it equally. The VF funds are used to support grants, scholarships, residency programmes and mobility programmes,” explained Roman Hloben, the Slovakian Ambassador to Montenegro.

Petr Smejkal, the chargé d’affaires of the Embassy of the Czech Republic in Montenegro reminded that members of Visegrad Group are supportive of Montenegro on its Euro-Atlantic path.