The fall of the Berlin Wall on 9 November 1989 came about by accident. The German Ministry of Propaganda had mistakenly announced, ahead of time, that the East German citizens can finally apply for visas to visit the “west.” Thousands of people immediately rushed to the borders, and the unprepared police decided to raise the ramps instead of using force. The demolition of the wall began that day, while the significance of the event is still felt even today.

This was also confirmed by the Ambassadors of Germany, Poland, Hungary, Russia, and the USA at the panel “30 Years since the Fall of the Berlin Wall,” which was organised by the Embassy of the Republic of Germany in cooperation with the Montenegrin Pan-European Union at the EU Info Centre. 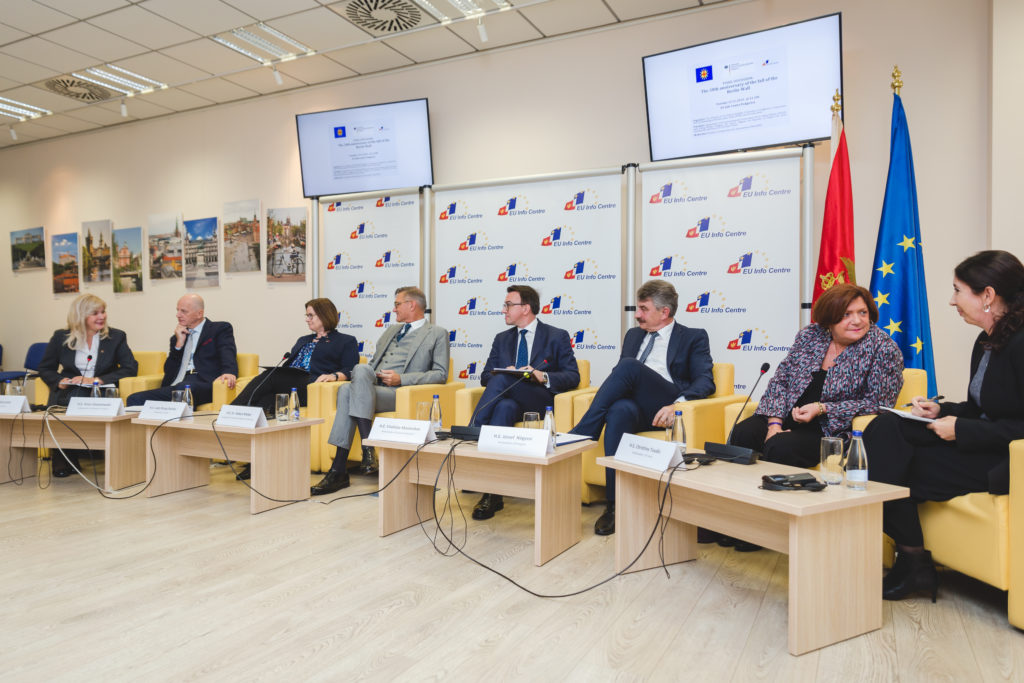 The Polish Ambassador, Artur Dmohovski, said that 1989 was the year when Europe was born again, because it brought changes not only to Germany but also to Poland and to the whole continent.

“The fall of the Berlin Wall is a symbol of historical change. It was spectacular, a symbol of all the changes from the north to south of Europe. For my generation, 1989 remains the most important historic event we have experienced. It still lives in our memories. We actually divide our lives before ’89 and afterwards. Perhaps, I wouldn’t even be here today if it hadn’t happened,” Dmohovski said.

The German Ambassador, Robert Weber, estimated that the fall of the Berlin Wall had changed the course of history, as well as the lives of many citizens. 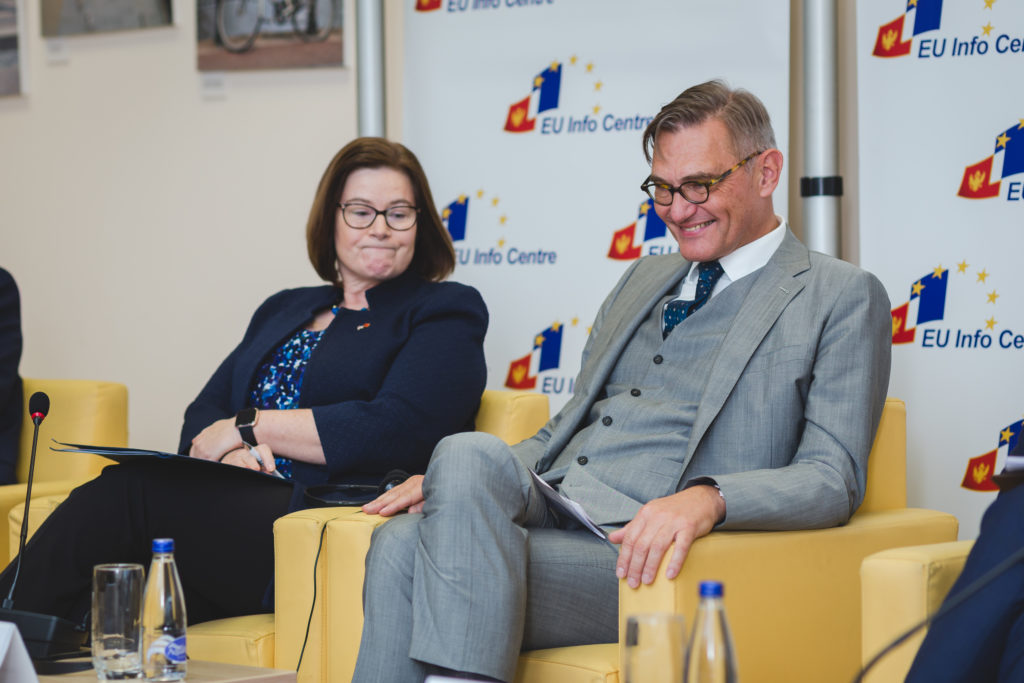 “The police were surprised when citizens arrived at the border on 9 November. The people were impatient, but the situation never went out of control, there was no violence. People were dancing,” recalls the German Ambassador, who was preparing his last college exams at that moment. “I was constantly torn between the book and the TV. We were watching the situation live. It was a combination of a personal feeling of happiness and the incredible fact that you were attending a historic event without knowing how big it was at the time. ”

The Russian Ambassador to Montenegro, Vladislav Maslenikov, said that the fall of the Berlin Wall was one of the key events in the history of the European continent, which still has not lived up to all expectations. 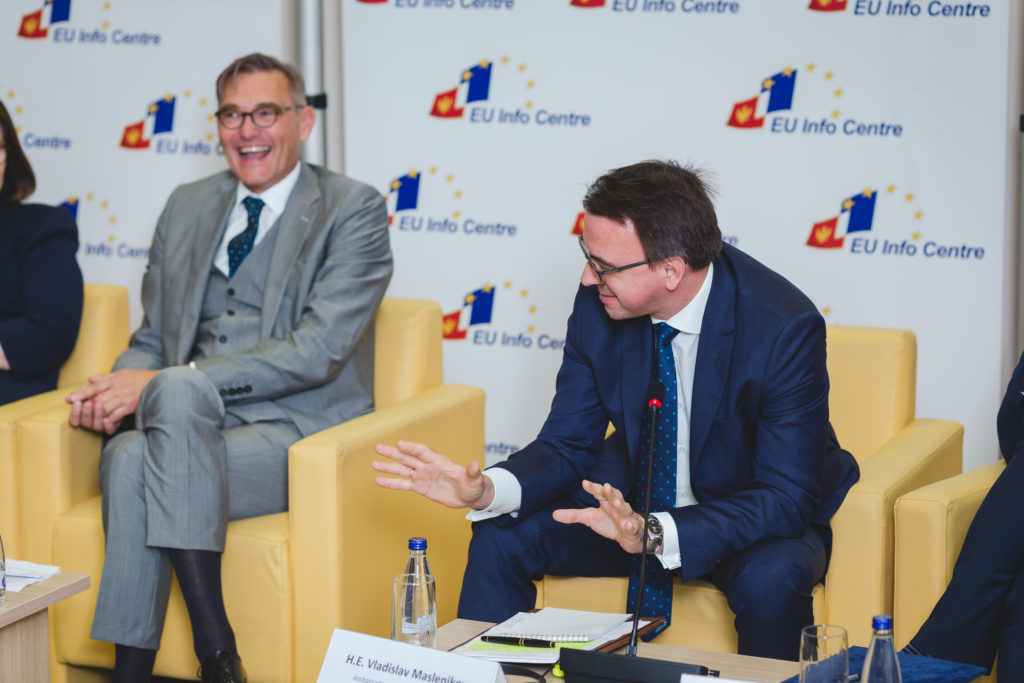 “The demolition of the wall was an emotional event connected with the great changes that took place in Europe in the late 80s and 90s. These changes formed the basis for many expectations among people in terms of creating a new, peaceful, prosperous Europe without lines that would divide it. From today’s perspective, I can say that, unfortunately, not all of these expectations have been fulfilled,” Maslenikov said.

The demolition of the wall was preceded by a “Pan-European Picnic” at the border between Austria and Hungary, which allowed several thousand East German citizens to flee to Western Europe. The Ambassador of Hungary, József Négyesi, pointed out that this event accelerated the fall of the Berlin Wall and the democratic transformation of Eastern Europe.

“Everyone started crossing the border to Austria; this image can be recollected. That’s why it was said that the first brick from the Berlin Wall was broken from the side of Hungary,” Négyesi said.

The US Ambassador, Judy Rising Rineke, admits she was not aware of what the division of the Berlin Wall represented until then, even though, as a girl, she lived in Germany for several years and later visited as a student. 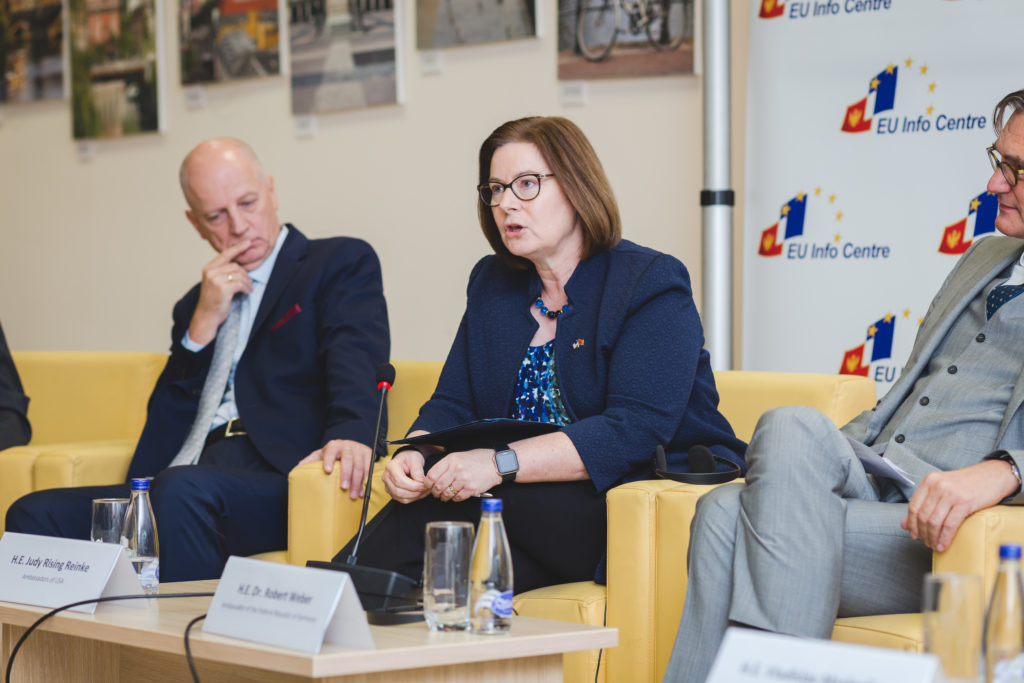 “However, I remember the Americans went completely crazy when the Berlin Wall fell. They felt how important it was for people to win freedom. That, I remember, was celebrated,” Rising explained.

The French Ambassador, Kristin Tudik, recalled that young French people gathered at the Bastille Square to celebrate the fall of the Berlin Wall.

The construction of the Berlin Wall began in 1961 to prevent the outflow of East Berlin residents into the western part of the city. Over time, it reached a length of 155 kilometers. For 28 years, it stood as a symbol of the Cold War and the Iron Curtain.