Podgorica, 1 December 2016 – Pupils at Slobodan Škerović High School had the opportunity at the EU Info Centre to hear what awaits their country in the negotiation process when it comes to environmental protection. Chapter 27 has not been opened yet, because Montenegro has not fulfilled the European Union’s basic requirements that are necessary to start negotiations. This area is one of the most demanding in the entire negotiating process, as the Deputy Minister of Sustainable Development and Tourism, Ivana Vojinović, explained.

“This is one of the most complex and most demanding chapters that Montenegro has in the negotiation process with the European Union. This chapter is also the most expensive. We estimate that Montenegro, in the coming period, will need to invest around a billion and a half euros in order to meet all the demanding standards of all the tasks that the European Commission has imposed, ranging from waste management to air-quality protection, water management, protection of nature from industrial pollution, protection of the environment from noise pollution and climate change,” explained Vojinovic.

The commitments are numerous. In each commitment there are clear rules and Montenegro will not be able to close Chapter 27 without applying them. One of the commitments is to establish a recycling centre, and the citizens are expected to sort their waste for disposal. Also, industry must reuse up to 70% of construction materials in its processing and for this we need a centre for processing construction waste. Fly-tipping should be consigned to the past. Each of these landfills needs to be rehabilitated, like the one in Bar.

“The Municipality of Bar since 2008 has not been taking waste to that location. As a project, the rehabilitation of the Bar landfill, located on the road to Ulcinj, to my great joy, has been advancing far better than all the other projects financed from IPA Component III. Now there is a green area, and we plan to build a lookout post, because the view from there is beautiful. We will set up benches, too,” said Milo Markoč, Senior Adviser for the Environment and Water Management in the Municipality of Bar.

The European Union’s rules are clear, explains Markoč. And they are very demanding for member states too: figures show that the recycling of 50% of waste has been achieved by Germany, Austria and Belgium, while Hungary, for example, recycles only 4-5%, just like Montenegro.

“Italy is the best example. The northern part of Italy solved the issue of waste disposal and recycling remarkably well, just as well as in Germany, if not better. But Italy also has its south, and in particular I can single out Naples. For those areas where they have not resolved the issue of waste disposal, Italy will pay a fine. They received a final judgment from the European Court of €40 million; this is, I think, the biggest judgment handed out by the European Court to one country,” said Markoč. 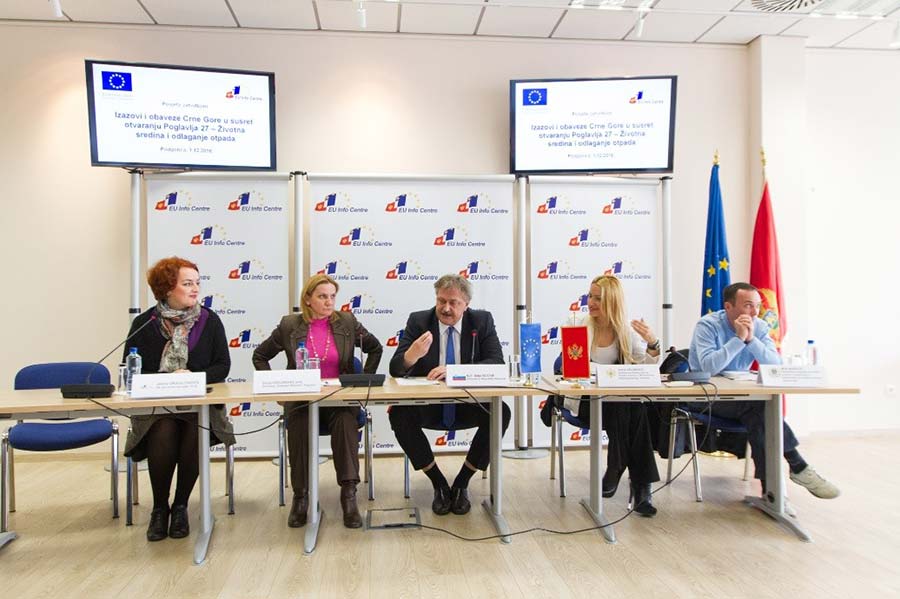 Environmental protection in the negotiation process was the number one issue for Slovenia. The Ambassador of Slovenia to Montenegro, Mitja Močnik, remembers that it was not easy to leave behind old habits and immediately move on to sorting out waste.

“It was not easy. What can be observed over the last 15 years is that the environment is cleaner, but there are large fines. For someone who gets a fine this is no small matter. We did not know how to deal with it at all. But that’s the good thing with EU membership – you’re forced to implement the law and they force you to start doing something that is positive for everyone,” explained Ambassador Mocnik.

The Government hopes to open Chapter 27 in early 2017, and then to meet all the standards required by the European Union in the next two to three years. For now, we have two regional landfills that are up to the standards of the Union, and those are the Livade landfill in Podgorica and the Možura regional sanitary landfill in Bar. Yet, the most difficult tasks are still pending.

“If we start from the fact that we in Montenegro still have sites that require demanding measures such as red mud at the Aluminium Plant and the Maljevac landfill by the power plant. Remediation is required for the grit landfill in the shipyard in Bijela and it is already estimated that the repairs will cost around €18 million,”said Vojinović.

All the speakers agreed that awareness campaigns among citizens are extremely important, but the education system is most important.

“Education is very important and starts from the first grade and is constantly being reinforced. Biology programmes are structured so that children become familiar with the problems of environmental pollution. Now the emphasis is on the fact that the pupils come to the conclusion themselves that they can voice their opinions and problems, and come up with solutions. Children should be encouraged and we are going to meet that goal and all that is necessary,” concluded Sanja Ognjanović, a professor at Slobodan Škerović High School.