Podgorica, 14 June 2018 – Montenegro has finalised and submitted its negotiation position for Chapter 27. However, as the organisation Coalition 27 says, a lot of work still needs to be done. At the closing conference for the project at the EU Info Centre, representatives of Coalition 27 reiterated that the environment and Chapter 27 should be a priority of the government in order to prevent later negative consequences for Montenegro. 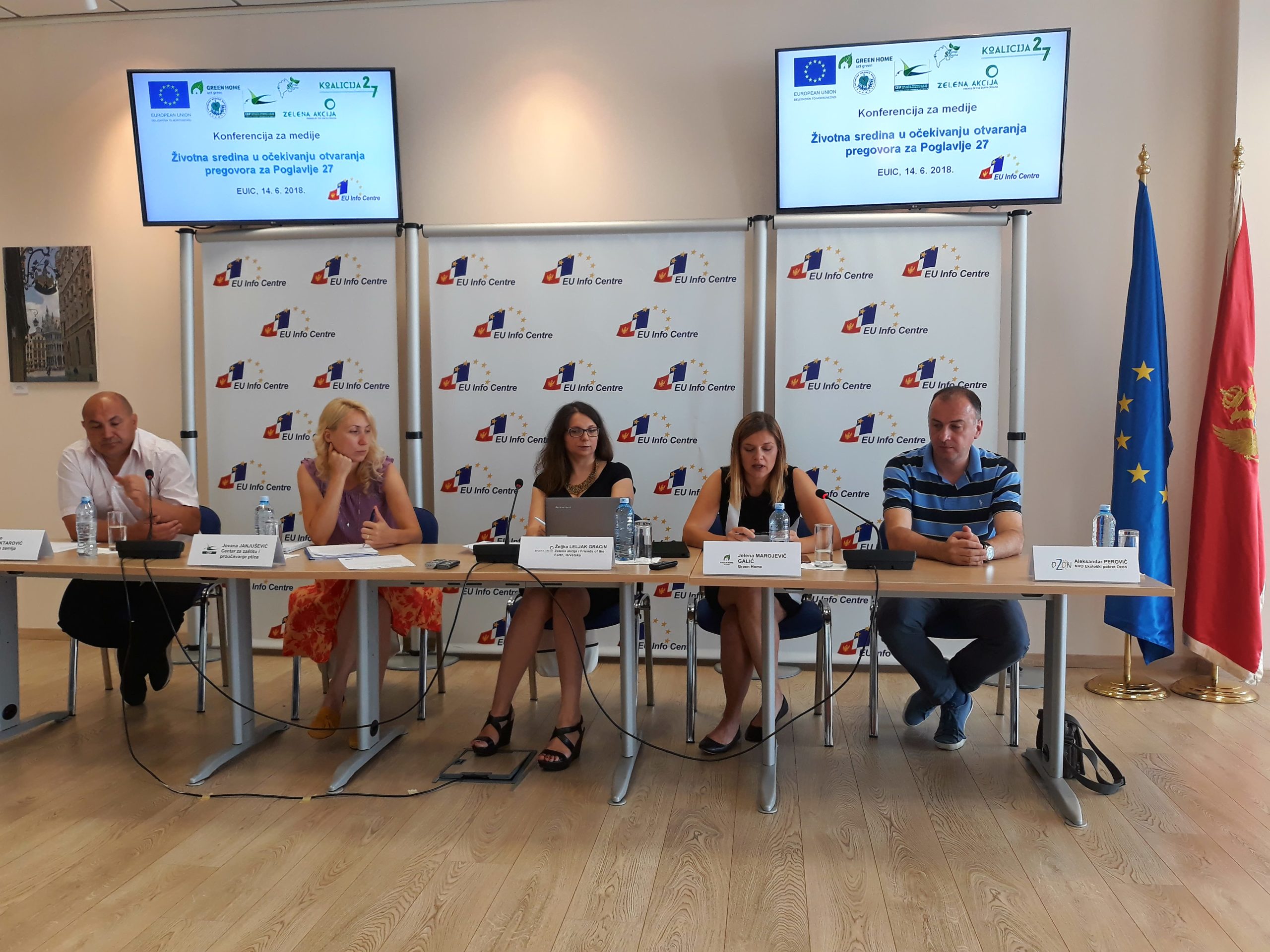 Representatives of the NGOs Green Home, the Centre for the Protection and Study of Birds, the Society of Young Ecologists and Friends of the Earth from Zagreb summarised the results of Coalition 27’s work. Unfortunately, many problems from the beginning of the project remain unresolved at the end.

“Our coalition has been particularly concerned about the significant delay in the protection of Ulcinj’s Salt Works, which, after a large number of conferences, events, promises and studies, is still not protected. We have in particular expressed concern about the numerous infrastructure plans envisaged in protected areas and areas of high biodiversity value, as is still the case with the project for the construction of Porto Skadar Lake on the territory of Lake Skadar National Park,” said Jelena Marojevic Galic from Green House.

Marojevic recalled the key conditions that the authorities should fulfil: “Capacity building, improvement of inspection services, as well as finding a model for financing negotiations under Chapter 27 are required.”

Zeljka Leljak Gracin from the NGO Friends of the Earth explained using Croatia’s example what the non-fulfilment of obligations in the pre-accession period means.

“What follows are fines. I think that it is quite important that Coalition 27 use this argument in its efforts to make this pre-accession period better for Montenegro. It means that directives are incorporated into your legislation to the best and the greatest extent possible. And application of these different procedures starts very well. Because once you enter the European Union, the EU will penalise those members that do not act as they should, for example in the area of waste management, because you are late and did not apply what was supposed to be applied.”

Five years after joining the EU, Croatia is facing the consequences of non-applicable directives. Zagreb expects to pay the penalties.

“Several procedures are being conducted against Croatia in certain areas, especially waste, water and nature protection. The EU only waited for their entry to start these very serious procedures, that will cost Croatia a lot of money,” Gracin said.

The NGO Green Home, the Centre for the Protection and Study of Birds (CZIP), the North Country, the Society of Young Ecologists and Friends of the Earth from Croatia are implementing the project “Capacity Building for a Better Environment in Montenegro”, supported by the Delegation of the European Union to Montenegro. The coalition was conceived as an open platform for the joint monitoring and participation of civil society organisations in the process of advocating and promoting European developments in the field of the environment and climate change in Montenegro, which through its activities will contribute to the quality and transparency of the negotiation process and, in the long run, take care of the state of the environment.