Rajka Stevovic from Niksic has beaten breast cancer. She was one of the 300 women diagnosed with this illness every year in Montenegro. It is a battle that, statistically, 80 women lose every year.

Rajka did not have any prior symptoms. She just went with her friend to the preventative breast examination organized for free as part of the EU-funded awareness-raising campaign in Niksic. As it turned out later, this campaign would save her life.

Breast cancer is the most common type of cancer among women worldwide. In Montenegro more than 300 new cases are diagnosed every year. In the last few years around 80 lives have been lost annually, despite the fact that breast cancer is treatable in almost 90 percent of cases, but only if diagnosed early. That is where awareness campaigns about preventative examinations have their role.

Rajka Stevovic, a breast cancer survivor from Niksic, confirms this:”The disease was detected in its early stages and in time, and the surgical procedure which followed was successful. In my case, the preventative examination saved my life. Preventative examinations are simply a must for all women.”

Rajka might not have even taken the test had she not heard about the free examinations organized within an EU-funded campaign on prevention and early detection of breast and cervical cancer. “Like all women above 40, I often thought about having a preventative breast examination. However, for various unexplainable reasons, such as having other things to do, a lack of time, etc. I kept delaying it, until this project was run and my friend and I received an invitation to take a preventative breast examination. My friend suggested we take that opportunity and have the examination. I was diagnosed with breast cancer, although I did not have any pain or other symptoms”, says Rajka.

The examinations were organized within the project PARHS – Preventive Actions in the Reproductive Health Sector, receiving funds of almost €200,000 from the EU during 2013 and 2014. Svetlana Mijanovic, a gynaecologist at Niksic Health Centre said that the project had had a considerable impact on the target groups and their institution.

“All the project activities were effective and useful, but I would like to stress the importance of organised examinations of women, which resulted in detecting several pre-malignant conditions in some of the patients who came to the health centre through this activity. Afterwards, the patients were treated surgically and completely cured. In my opinion, such campaigns are really about saving lives”, says Mijanovic. 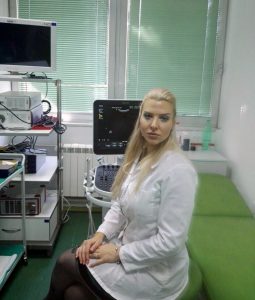 Besides the awareness-raising campaign, and the free scheduled preventative breast and cervical examinations in Niksic, Berane and Pljevlja, the EU has also contributed to the capacities of local medical institutions through this project.

According to Bulatovic, another project component – cross-border cooperation with the Serbian municipalities of Raska and Novi Pazar has improved their communication with their colleagues from Serbia and led to an exchange of experiences and best practices, which is very important for their work.

Exchanges of information and, even more importantly, the dissemination of this information to women in Montenegro, who, as doctors say, still tend to only go to the doctor when illnesses are in their late stages, remain a must, not only in Montenegro. Throughout the world for many years, awareness-raising campaigns about the fight against breast cancer have been run during October, marking so-called Pink October, named after the pink ribbon worn by supporters and promoters of the initiative. It works well for campaigns, but, for preventative check-ups, you don’t have to wait until October!