The prize quiz within the biodiversity campaign has been completed

It’s time for prizes! We have drawn the names of the winners from our prize quiz, organised as part of the online educational campaign “I am also with you,” which can be found on the website www.biodiverzitet.me

During the month of the campaign, over 5,500 competitors tested their knowledge about biodiversity, and 2,768 of them applied for prizes, which included: five bicycles, four binoculars (provided by the Centre for the Protection of Birds) and 12 eco-packages inspired by nature.

They qualified by winning over 70 points for the third prize, more than 80 points for the second and over 90 points for the first prize. The names of the qualified competitors were entered into the “drum,” from which winners were chosen at random. You can see this proccess on our Facebook page.

We organised the prize quiz as a follow-up to the campaign on biodiversity which we dedicated to urban species this fall. If you are afraid that a bat may stick to your hair, a lizard may bite while you sleep or a fox may attack when you meet it in the city forest, we suggest you visit our website www.biodiverzitet.me to learn more about them and accept them as your harmless neighbours.

On the website you can also find out why the magpie is one of the most intelligent birds, whether the chipmunk ever rests, what the red sponge is, how the compass jellyfish got its name, can the gecko be your pet and so much more. You can also “meet“ plants, mammals, birds, amphibians and reptiles, insects and marine species – a total of 62 urban species which we presented in a picturesque and interactive way through texts, photographs and illustrations.

Preserving biodiversity as one of the EU’s priorities

We started the “I am also with you” campaign last year with the introduction of 54 protected plant and animal species. Our objective was to help the public get to know them and protect them better. We were inspired by the European Green Deal, which is the EU’s growth strategy for sustainable development in the 21st century, aiming to make Europe the first climate-neutral continent by 2050. The European Union has also put forward the Green Agenda for the Western Balkans, by which Montenegro and other countries of the region committed themselves to implementing measures to combat climate change, tackle pollution and ensure clean energy, and develop biodiversity , sustainable mobility, circular economy and sustainable food production systems.

We are running this campaign in collaboration with our partners: the Environmental Protection Agency, the Institute of Marine Biology in Kotor, and NGOs Centre for the Protection and Research of Birds, and the Montenegrin Ecologists Society. 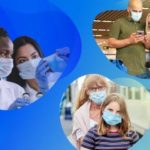 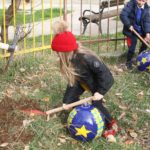 Seedlings as gifts by the EUIC for a Niksic kindergarten