The EU Info Centre held a panel discussion on the Montenegrin film today with the participation of five younger-generation Montenegrin directors. The conclusion of the panel was that the lack of institutional infrastructure and also of clear social criteria are hindering the development of Montenegrin cinema and its better integration into the European framework.

Prior to the discussion, the EUIC organised the screenings of three Montenegrin short films: “The Tranquility of Blood” directed by Senad Sahmanovic, “All of That” by Branislav Milatovic and “Strawberries” by Jelena Lela Milosevic, as well as introducing a new short film “As Trains Go By” directed by Aleksandar Vujovic and the feature film “Black Pin” directed by Ivan Marinovic. The authors were also panellists.

“All of these films and the success they have achieved are unusual events in these circumstances because we primarily do not have the proper film infrastructure. Until we establish a national Film Centre and Film Commission with people who will set specific criteria and behave in accordance with these criteria, and until we establish a film fund, there is nothing that we can do. We are the only country in the region and Europe that does not have any of these things”, said director Aleksandar Vujovic.

Last year’s adoption of the new Law on Cinematography, which provides for the establishment of new state institutions the Culture Film Centre of Montenegro and a film fund, as well as the introduction of incentives for foreign producers to shoot their film and TV projects in Montenegro. The implementation of this innovated normative framework would put Montenegro on a par with countries that deal with the development and promotion of their national film industry systematically.

Montenegrin directors said that they as authors and producers have difficulty in finding a common language and room for cooperation with their colleagues from Europe, due to poor infrastructural support. The director, Jelena Milosevic, added that her film had been screened at 14 festivals around the world, but that she, as the film’s author, due to the lack of finances, could not visit any of them.
The panel pointed out that since last year Montenegro has had access to the EU programme for financing film – MEDIA, which still represents untapped potential, but Montenegro is also the only country in the region without access to the most significant fund of the Council of Europe – Eurimages. 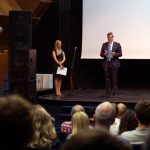 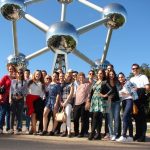