Prizes awarded for the winners of the “Europe and Me” competition

Podgorica 22 June – Pupils Ena Sajkic, Evgenija Popovic and Vasilisa Minic have received awards for the best works within the “Europe and Me” competition at the EU Info Centre. The works presented their vision of the EU and its values, and they received bicycles as prizes. Sajkic is a pupil of the Second Primary School in Budva, Popovic is from Petar Lubarda Art Secondary School in Cetinje and Minic is from Risto Manojlovic Elementary School in Kolasin.

The Head of the Political, European Integration and Trade Section, Plamena Halacheva, said that Montenegro, on its way to becoming a member of the EU, is offering young people the opportunity to accept the EU’s values ​​and strengthen their intercultural and linguistic skills. The circulation of knowledge, student mobility, research and intercultural dialogue are important European values ​​for the current EU citizens, but also for the future ones, said Halacheva.

“Evgenija, Ena and Vasilisa – you are future EU citizens and share the same values ​​as EU citizens. Ena’s picture shows that Europe was built on elements of peace, Evgenija painted the importance of valuable work and perseverance, and Vasilisa beautifully described the idea of ​​tolerance in the EU. I’m moved by your work,” said Halacheva.

The Deputy Chief Negotiator and National Coordinator for IPA, Ivana Glisevic Djurovic, reminded that Montenegro has advanced a long way in the process of EU accession talks, and said that the most of the benefits from Montenegro’s membership of the EU would be felt by Ena, Evegenija and Vasilisa’s peers.

“That’s why it’s important that the EU continues to be the subject of your attention, both formal and informal, and that you always strive for new insights to build your own vision of the importance of a European democratic society,” said Glisevic Djurovic.

The representative of the UNDP Office in Montenegro, Tomica Paović, pointed out that the students’ work is a reminder of how to communicate daily on EU topics, so that everyone can identify with it.

“This is one of the goals of our joint EU4ME project. Thanks to EU funds, UNDP supports the Government of Montenegro in communicating both the benefits and responsibilities that arise from membership,” said Paovic.

Almost 200 students’ works were entered into the “Europe and Me” competition, which was organised in accordance with the 2014-2018 strategy for informing the public on Montenegro’s accession to the EU, and within the EU4ME project funded by the European Union and implemented by UNDP. Pupils from Montenegrin primary and secondary schools showed through pictures, literary and musical works, photographs and videos how they see Europe and their place in it. The best three works were selected by an expert jury consisting of the academic painter Teodor Nikcevic, writer Milisav Popovic, and representatives of the project team. 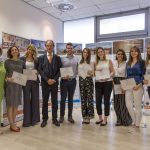 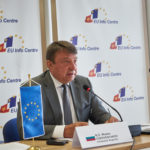