What we have not had yet – the opportunities

Meetings, preparations, several hours of talks, identifing community problems and the way to resolve them – is an everyday for a dozen Roma that participate in the project “Strengthening public activism of Roma” funded by the European Union.

“The name of the project shows that it is necessary to strengthen public activism of Roma. Five years ago, we could not gather five young people who are in educational system, who want some positive changes in the community, who want to work on some things. Today at seminars we have up to 20, 25 of the participants. “explains Elvis Berisha, a law student at the department of security and politics, and continues:

“Me and my colleagues are members of the platform, the first of its kind, we develope guidelines in which direction should go Roma activism in order to integrate Roma into society in Montenegro”. 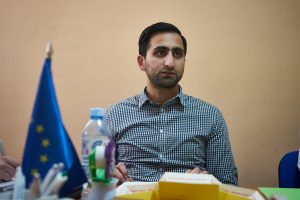 Such work, training and seminars they attend, are already making them active in the Roma community. Elvis, for some time, participates in the public life of Roma. He is recognized by his  colleges fro the Faculty and nongovernmental sector, and has been a member of the working group to develop a strategy for social inclusion of Roma and Egyptians in 2016 – 2020. But then, as he says, he had no chance to get so involved in the drafting of the document.

“This initiative is the foundation of all actions and projects to be implemented together. This is what we have not had, opportunities. Opportunities for greater involvement, especially of young, and if you look at the Roma community in particular, you will see that we really have a very small number of young people from the community who are involved in public activism, and in social life. “says Elvis.

The plan is to integrate the problems of young Roma in the document, as well as suggestions on how to get rid of them, and then to put it on the table for decision makers at the national and local levels.

“My opinion is that this project will not only give an opportunity for young people to learn and listen about some topics such as democracy, human rights and public relations, but we have been given a chance to, what we think is good and useful for young people above all, and then for the entire community, put on paper in a document that we will later realizee, “adds Serdjan Baftijari, student of the Faculty of Political Science.

There a lot of problems, a few dating back twenty years ago, so there has been room in the document for some wishes from childhood.

“We are going in this direction, that there should be a place for young people, especially in Podgorica, and since Roma are most inhabited in Konik, perhaps to create here a place where young people could come together, exchange ideas, and then find a solution to this idea to be realized. ” said Serdjan. 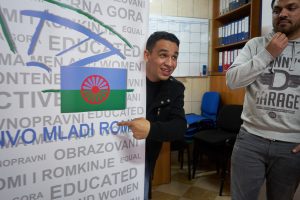 Twenty Roma who daily work on the project are just a part of the network that is slowly spreading throughout Montenegro. What they learn at meetings and through activities is one side of the story, and how it all affects them is another.

“It helps the confidence, not only to members of the Roma population. We’ve got the experience and the courage to report on some of the other competitions. I’ll try to enter the competition for internships. Thanks to the work with colleagues on the platform I got the confidence to sign up, I have been informed and I hope that I will succeed, “shyly reveals her plans Almedina Jasharaj student of the school of economics.

And she was able to. Shortly after this conversation we met Almedina with activists of an NGO while she was preparing a press conference in the framework of another project financed by European Union “Initiative for open judiciary.” 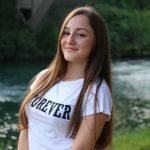 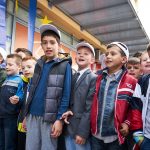 Quest for Human Rights All the Way to Berlin