The World Refugee Day was marked at the Reception Centre in Spuz, with a special programme organised by the Interior Ministry and the support of the Office of the United Nations High Commissioner for Refugees (UNHCR).

“World Refugee Day is an opportunity to remind ourselves that Montenegro has ensured full respect for refugee rights through the adoption of international standards and the establishment of key civilisational values – such as solidarity, tolerance, and respect for diversity. Montenegro has also contributed to the creation of an inclusive community with its legislation, striving to legitimise ourselves as a society of European values ​​and perspectives,” explained the Interior Minister Mevludin Nuhodzic.

Nuhodzic emphasised that the Government of Montenegro, in cooperation with the United Nations agencies, the Delegation of the European Union, and the civil sector, has implemented numerous activities to improve the position of those who are forced to leave their homes in a humane and responsible manner.

“However, this is not a day just to reconsider what we have done and more we can do. This day reminds us that it is very important that the successful integration of refugees enriches our environment and that we should provide help and words of encouragement to anyone who is persecuted for their diversity, which should serve as a thread that unites, not separates. It is also in the spirit of our multicultural tradition,” concluded Minister Nuhodzic.

Hermann Spitz, the Head of the Cooperation Section of the Delegation of the European Union, stated that the EU is cooperating with Montenegrin state institutions and the UNHCR Office in the field of improving the legislative framework and improving the position of displaced individuals in Montenegro.

“The European Union is the largest donor to the Regional Housing Programme. To date, housing units have been provided for about 400 refugee families. At the end of the summer, we expect the beginning of the construction of new apartments for the 96 most endangered families in Vrela Ribnicka, Podgorica,” said the Head of the Cooperation Section of the Delegation of the European Union.

The event was also attended by Roberta Montevecchi – the UNHCR Representative in Montenegro, Juan Santander – UNICEF Representative, Dusica Zivkovic, the Head of the Office of the International Organisation for Migration, and civil society representatives: the NGO Legal Centre, NGO Civic Alliance, NGO Juventas, as well as representatives of the Red Cross. 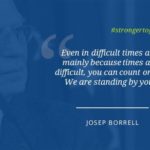 The Eastern Partnership is at the heart of EU foreign policy 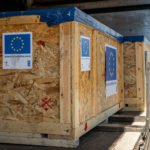