PODGORICA, 27 April 2016 – Delegation of the European Union to Montenegro, with the support of the EU Info Centre, will mark 9 May, Europe Day in Montenegro, which has become a tradition over the past few years. This year the EU marks two special occasions as well – the 60th anniversary of the signing of the Treaty of Rome and the 30th anniversary of the Erasmus program, which is the oldest program of the European Union in the field of education.

To mark Europe Day in Montenegro, there will be a three-day celebration, starting on Friday, 5 May at 21h00, at the Nikšić fortress “Bedem”, where in cooperation with Bedem Fest we will host a DJ party dedicated to the celebration of the 30th anniversary of the Erasmus program. The audience will be entertained by Montenegrin DJs DJ Iron, Petrumatik, and Proximus, and the star of the evening will be Lea Dobričić, one of the most famous regional DJs.

“This party is a gift of the European Union to students and all young people in Montenegro, on the occasion of the 30th anniversary of the Erasmus programme, one of the most successful EU programmes ever. With the Erasmus, young people have the opportunity to travel around Europe and study at European universities, and as of recently they also have the opportunity to gain work experience in EU countries,” said Stefan Vukotić, Press and Information Officer at the EU Delegation in Podgorica.

“It’s nice to start in Nikšić, In this way, Nikšić will have the pleasure to offer its citizens and all guests and visitors a great entertainment programme, thanks to the Delegation of the European Union and the EU Info Centre,” said Peter Šundić from Bedem Fest.

On the second day of the celebrations, 6 May at 21h, the famous Viva Vox choir will hold a concert at the Independence Square in the city centre of Podgorica.

Entry to both concerts is free of charge.

The main celebrations will take place on Tuesday, 9 May, starting at 10h00, in front of the EU Info Centre, 19. December 8 Street, near the City Stadium. The three-hour programme will include various activities.

As part of the children’s programme, the Symphonic Orchestra of the “Vasa Pavić” Music School will perform and children from kindergartens and primary schools will present their skills in several performances. For our youngest guests we are preparing a rich entertainment programme with the participation of animators. During the celebration ceremony, participants of the artistic Contest “Europe – That’s Us,” which involved 43 schools from 18 municipalities, will be awarded.

At the same time, in front of EUIC, the Embassy Fair, featuring EU Member States, will provide an opportunity for Montenegrin citizens and visitors to get acquainted with the EU’s diversity, to learn more about the culture of other European countries, and to taste national dishes from EU Member States.

As part of the Europe Day celebrations, Association of Fine Arts of Montenegro will host, under the auspices of the Italian Embassy in Montenegro, a photo exhibition by famous artist Tina Modotti. Her work will be exhibited in the Art Pavilion in Podgorica from 5 to 13 May 2017 and from 15 to 30 May photo exhibition will be placed in Tivat, in the Museum of Maritime Heritage in Porto Montenegro.

The Ministry of European Affairs, together with the Delegation of the European Union to Montenegro and supported by the EU Info Centre, will celebrate Europe Day in Ulcinj, at the central town square, starting at 12 o’clock.

We hereby extend our warm invitation to everyone in Montenegro to join us in celebrating Europe Day!

Europe Day is celebrated every year on 9 May to honour the Schuman Declaration of 9 May 1950, in which the then French Foreign Minister, Robert Schuman, set out his idea for a new form of political cooperation in Europe, which would make war between Europe’s nations unthinkable. His vision was to create a European institution that would pool and manage coal and steel production. A treaty creating such a body was signed just under a year later. Schuman’s proposal is considered to be the beginning of what is now the European Union. 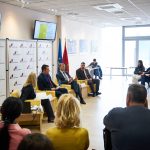 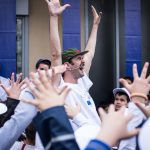