In accordance with Montenegrin history, female soldiers are also expected to find a place in our campaign. That is how we paid tribute to Ljubica Popović, an activist and national heroine of Yugoslavia. There is also Milosava Perunović, who went to the First World War as Milosav, aware that otherwise she could not have defended her country.

Soldier Nevena Nikolić did not have to conceal her identity in order to be able to enrol and graduate from the prestigious US Military Academy at West Point. She is the only person from Montenegro to have managed to do it. Prior to the academy, she never fantasised about the army, nor did she have experience with vigorous exercise. No one in her family had a military education. She decided to take this path after hearing about the West Point Academy in a lecture at secondary school. In addition to formal education, the academy also provided her with an education for life. She has learned to overcome every challenge, push her own boundaries and never give up.

“Data suggest that out of 1,200-1,300 students who enrol in the West Point Academy, only 900 will finish. During my first day at the academy, the bell rang after only 17 minutes. That bell goes when the first person gives up. Perseverance helped me not to be that person. Perseverance has no gender – it doesn’t matter whether you are a woman or a man or what is your starting position in life. If you have a goal and show persistence to reach it, I’m sure any door must open and you just have to reach that point. I would like to encourage everyone to continue and persevere in the idea, no matter how unconventional it may be,” says Nevena.

Nevena Nikolić was born in Podgorica on 28 February 1997. After graduating from Slobodan Škerović Upper Secondary School, she obtained a degree in economics at the West Point Academy. Today, she is a lieutenant and has been with the Ministry of Defence since September 2021.

Nevena Nikolić was one of the speakers at our panel discussion entitled ‘Examples of SHEvalry and SHEroism’, which we organised as part of the campaign of the same name. 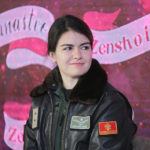 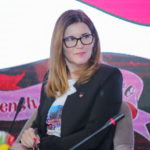