The top experts in relations between the EU and Montenegro among Montenegrin university students, 17 of them and two high school students that had won a competition for the best photograph and video on the subject of the EU, and two representatives of the Montenegrin Association of Political Science Students (MAPSS) spent five days in Brussels as part of a trip organised by the EU Delegation to Montenegro. The competition for students called “September in Brussels” was organised by the EU Delegation to Montenegro, the EU Info Centre and the Faculty of Economics and Political Science of the University of Montenegro.

Over the five days, the winning university and high school students visited the institutions of the European Union and attended numerous lectures. In the EEAS, the diplomatic service of the European Union, they held talks with Nicolo Gasparini, Frederic Schwandt and Clive Rumbold. This visit to the European Parliament was intended to familiarise the students with the working processes and procedures of making decisions. In the Directorate General for European Neighbourhood Policy and Enlargement Negotiations (DG NEAR) the visitors were welcomed by Camelia Paraschiv, Thomas Hagleitner, Angela Longo, Maja Smrkolj, Roxana Merticariu, Adrian Nicolae and Kjartan Bjornsson. The students used “September in Brussels” to find out first hand all the details regarding what the Erasmus+ programme offers.

They also visited the Permanent Mission of Montenegro to the EU. They talked with Ambassador Bojan Sarkic on relations between our country and the European Union, as well as with the Montenegrin Ambassador to Belgium, Vladimir Radulovic.

The students had the opportunity to hear from Nicholas Whyte on what lobbyists do and how they work. It was interesting to hear a view of the current situation from the perspective of a large NGO like the Science and Politics Foundation (SWP) and its head, Dr. Dusan Reljic. Alongside all this, the students found time for a tour of some of the other sights of Brussels, such as the Atomium and the Manneken Pis, but also were able to sample Belgian chocolate and spare ribs. 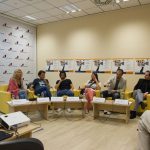 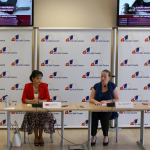 Results of research on the transparency of the courts presented