As part of our campaign on protected plant and animal species “I am with you, too,” which was presented on the website www.biodiverzitet.me, we awarded the best players of the this biodiversity-related quiz. Packages of eco products inspired by nature were awarded to Radovan Backović from Nikšić, Danica Čvorović from Pljevlja, and Amra Lješnjanin from Plav, who were chosen at random among the best ranked players of the prize quiz.

We presented 54 species on the website in an interesting and interactive way through texts, photos, and illustrations. In one section, users can learn more about plants, mammals, birds, amphibians and reptiles, insects, and marine species all protected under Natura 2000, an ecological network of protected areas formed by the European Union. “I am with you, too”- as the campaign is called – is symbolically represented by a brown bear and a chamois, a flamingo and a black grouse, a good dolphin and a golden coral, a lynx and a creeping bell, a dragonfly and a tiger bear, a river turtle and a leopard, as well as many other important but endangered species that we need to preserve.

In a month, the website was visited by over 4,000 people, and the quiz was played by more than 1,200 competitors. In addition to the quiz, every week we rewarded our followers on social networks, who were able to win birdhouses, wooden puzzles for children, Christmas tree decorations in the form of protected species, and other eco products. The aim was to further promote this topic and thus point out the importance of biodiversity protection.

We collected data on protected species in cooperation with the partners: the Environmental Protection Agency, the Institute of Marine Biology in Kotor and non-governmental organisations, the Centre for the Protection of Birds and the Montenegrin Society of Ecologists. The reason for organising this campaign is the Green Deal of the European Union, which represents the strategy of sustainable development of the EU for the 21st century and sets the goal of making Europe the first climate-neutral continent. An important pillar of this agreement is the protection of biodiversity, the protection of which was the central theme of the “I am with you, too” campaign. 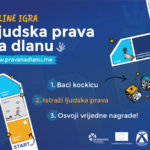 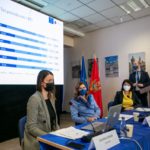